Skip to content
Intern Learning About Ethnic Minorities in Myanmar

By Suyeon Min, Asian Children’s Mission 2013 summer intern
(Suyeon, also known as Mandy, is from Korea but did her high school work in Burma. She is now a rising junior at Hampton University in Massachusetts. She is fluent in several languages, including Burmese)
When I enter the black iron door of Hope Children Home, the first thing I experience is, children shouting “Sayama Labi! (The teacher is here!)” from playground. Then everyone instantly put their heads out from wherever they are,
girl’s dorm, boy’s dorm, and kitchen. Girls run towards me and older boys come to carry my bag pack. I told them that I am fine, but they insist. As I enter my room, my windowpane is full of students already. The little ones stay in front of the window and big kids stay behind. They keep on watching me as I sit down on my bed. Then the little children run to the backyard to pick flowers up for me. They race because everyone wants to be the first one to hand 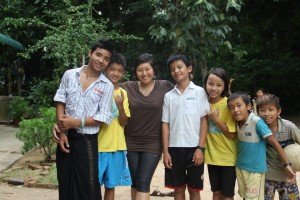 me flowers. The little children already came back with beautiful flowers in their small hands. When I hold their hands as they pass me flowers, my nose crinkles slightly and I feel so special. I inhale the smell of flower with rather exaggerated motions, and the children laughs. At first, I told children that I appreciate the flowers but don’t pick flowers because of me. Nevertheless, no matter how many times I told them and no matter how many times the older kids
shouted at them, the little kids kept on picking me up the flowers. So, I decided to show how much I appreciate them with action because that makes them happy.

My eyes are full of so many children from the Hope. They smile at me, they ask me questions and they want to play with me. This place is full of energy. If you just walk into the black iron door without knowing about this place, you wouldnever imagine that this is an orphanage.

The children in Hmawbi are not shy at all. Ever since I stepped into this place, they have been giving me their full attention, love and trust. I can only spend three days in a week with these children because it is illegal to have a foreigner at home.

This was a big surprise for me, because after spending four years in Myanmar, no one has ever told me that my stay is illegal. I rented an apartment room, but I also stayed at wherever I wanted to stay for four years. Even this summer, I actually stayed with a lot of my friends in Yangon. Having those experiences, I cannot get off thinking that why would the government make that kind of law and why that is still effective law for religious and ethnic minorities in outskirts of Yangon.

I cannot stop thinking that the oppression of religious and ethnic minorities is still big on going problem. Even though the recent government has been reforming many things in the country, the life of ethnic and religious minorities got hardly better. A lot of people I have met are believing that many things will change in near future, but after seeing and experiencing inequality and flaws of the law itself manifests, I am amazed by optimistic view of these people.

Disregarding the complicated politics in Myanmar, the children at Hope still fully appreciate my presence even that is only three days in a week. I was actually surprised to learn that they are not afraid to love me and ask for my attention and affection. To be honest, I thought that after being apart from their own parents from whatever the reason they have to be apart, I imagine the kids to be more introverted.

Even though, the children and I both know that we love and care about each other, it took me a while to learn the name of about 50 students and some of their stories of ending up in the Hope Children Home. 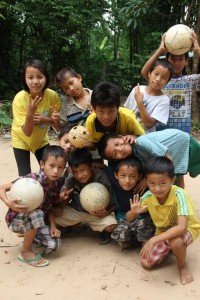 Recently, I posted on facebook regarding my experience of this summer and asking some donations (from Myanmar friends). After spending time with these lovely children, I came to understand that these children should have more than they ask for. Knowing Myanmar is one of the most unequally distributed countries of wealth; I decided to let my friends know what I have been experiencing with these children. Thankfully, some of my friends contacted me and donated some money, clothes, and snack. It was not much to improve their life greatly, but that little care of a few people can fill the heart of these beautiful children.

With the part of donation that I got, I decided to buy some soccer balls, volleyballs, chinlong and chinlong nets for children to play. I have seen young boys playing soccer, but there is only one soccer ball while there are at least 30 boys in the playground. Also, the children play volleyball with a soccer ball. I played volleyball with kids for a while and my arm was hurting for two days.

We put the nets together and played volleyball for two hours. I couldn’t believe how some balls can make these children so happy.