Today I saw a Smile of Jesus.  We had a very busy clinic at Pamiti Christian Church outside of Myitkyina.  I was working at my station and noticed a woman holding a small child.  The mother’s smile was enigmatic, beautiful, and full of experience.  In the flow of patients, she eventually reached my table.  I asked her to tell me her story. 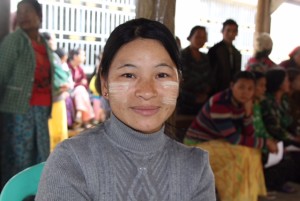 Her name is Anchar and she is 40 years old.  She is the mother of four children.  Her home is in an area of active civil war between the Kachin Independence Army and the Burmese Army.  Both she and her husband work hard as farmers, but the daily struggle is hard.   I won’t forget that in the midst of this, she responded graciously with a most engaging smile.

Another mom I met is Ah Tar.  She came to the clinic with her young sons.  She said, “Please pray for me.  I struggle every day to raise my four sons.  I am afraid they will get into drugs when they are older.”  She has reason to fear.  Northern Burma has one of the highest rates of heroin use in the world, which also feeds the HIV epidemic, as dirty needles are exchanged among users.

My translator for the day was Ah Dee Che, the director of Loving Fountain Orphanage Center.  Ah 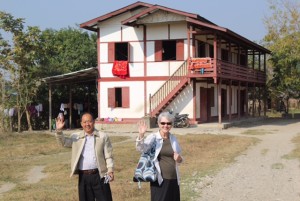 Dee Che met Joana Jones in Thailand, and invited her to come to Myanmar to do some teaching.  Joana went in 2008, and soon thereafter formed Asian Children’s Mission, which includes support for Loving Fountain.

In addition to the medical clinic, we also held a pastors’ conference, which 55 attended.  The pastor who led the 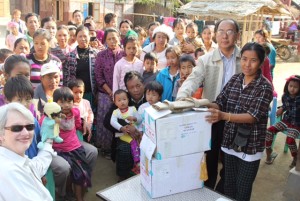 Gifts of medicine at refugee camp

singing lives in the war zone, squeezed between the Burmese and Kachin Independence Armies.  Recently he and all the villagers had to flee, but were able to return in a month.  Others living in this region are not so fortunate.  They are living in refugee camps.

Jeff Robertson and Tom Moen led the pastors’ conference.  They were especially touched by a first generation Christian — an 80 year old man who traveled to the conference on his motorcycle.

There are many other stories, stories that touched all of our hearts.  Our mission work was only possible because of the Morse missionary family who worked in this area a generation ago.  It is hard to over-estimate their influence and reach.  At one of the churches where our group preached, an 88 year old pastor stood up and told the congregation, “I have worked with the Morse family.  We are Christians today because of foreigners who came to tell of us Jesus.  Welcome them.”

Amelia Capotosta, the dean of a nursing school and a member of the FAME team expressed her thoughts near the end of our mission.  She said, “I am always impressed anew at the commitment of Christians who live in much less than ideal circumstances. Godly characteristics come through: love, togetherness, helpfulness, caring for one another. I always appreciate that.  They are such an example of what we should be. These Christians remind me to pray beyond my circle and include people like this — living like Christ.”