From December 29, 2015 – January 2, 2016, one of the great celebrations of the Christian faith will take place in Putao, in northern Burma.  And you are invited!

But first — some background concerning why this event will be so special among the world’s Christians.

The beautiful mountain town of Putao is both home and refuge to the Rawang people of Myanmar.  Although many have migrated to other parts of Burma for work, or to evangelize, Putao remains their special place.  From this mountain town, the Gospel came to their people – only three generations ago.  In fact, the Rawang leaders of Asian Children’s Mission are second generation Christians – it was their parents who first came to learn, and then love, Jesus Christ. 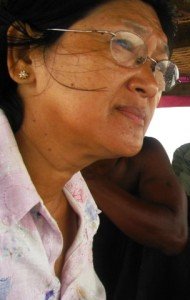 Maeram is a leader in literacy, education and the arts among the Rawang people. She is also on the leadership team of Asian Children’s Mission. She is helping to coordinate the Rawang cultural celebration to be held in Putao Dec. 29, 2015- Jan. 2, 2016.

Maeram, the educational coordinator for ACM, tells the story of her family’s conversion.

The gospel first arrived to the Rawang of Myanmar during the early 1950s, carried by Laverne and Lois Morse.   Maeram’s aunt was suffering from a long-term illness when she heard of preachers in a nearby village who prayed for those who were sick.  Those who were prayed for were healed.  Being an animist she and all her neighbors were familiar with offering animal sacrifices – chickens and pigs – to appease evil spirits and provide for the village shaman.  But this was not working for her. Believing she didn’t have much to lose, she walked to the neighboring village and asked for prayer.  And she was healed.

“When she came back to the village, she talked about this Jesus as a God, as a Savior, as a Healer,” Maeram remembers.  “The village people heard what she said, but they were not Christians yet.  But when the missionaries came to my village, my grandparents accepted Jesus, and all my uncles and aunts.  My father was the only one who did not accept Jesus, because he wanted to keep the traditional things.”  (Maeram’s father later came to faith, through a serious illness of his own, and became a co-worker with the Morse family and a great evangelist in his own right.)

Maeram’s grandparents were the village leaders and were held in great honor by all.  When they accepted this new God all villagers followed in wanting to do the same, though they had very little knowledge of Jesus.  The decision of their respected elders was enough to convince the villagers that there must, in fact, be a better God.

Even though their knowledge of Christ was limited, they knew their lives needed to change to follow him.  They were happy to stop making the animal sacrifices, as it boosted family income and food security.  But there was another area that was a little more problematic.

The rice wine had to go.  Stored in large pots, the wine was often used irresponsibly.  They felt that if they were to become Christians, they must forsake their rice wine.

“They did not want to just waste [it] and pour [it] away,” Maeram explained the dilemma.  She laughed as she remebered their cleverness.  “They set a date to drink all the rice wine before they accept[ed] Jesus.  So they had parties – drinking parties for three days.  And then, after three days, they decided to accept Jesus, but any leftovers were poured out.  Nothing was left in the pot.”

The same rice wine parties occurred in nearly every Rawang village in days prior to their acceptance of Christianity.  Along with rice wine, they also gave up their chewing of betel nut and betel leaves.  Similar to chewing tobacco, the leaves leave a red stain. On the date each village set, they threw out all leftover substances so they would not be tempted again.

In some villages, the youth were first to accept Christ, later followed by their parents.  In such scenarios, parents were frustrated and saw the new religion as an excuse to avoid work.  They knew that Christians were not to work on Sundays, but were to rest. “They were very angry at first,” explained Maeram, “but later they also became Christians.”

Though each conversion story is unique, the overarching theme that drew new Rawang believers was the power Jesus held over the “bad spirits” that interfered with their lives.  They believed these spirits caused sickness and harm.

The local shamens communicated with these spirits!   Maeram explained:  “Four or five days away from my village, a shaman saw these [bad] spirits coming from Wuning Village – that was my parent’s village.  He asked the spirits, ‘Where are you coming from?’  They said, ‘Oh, we are from Wuning Village.’  And he (the shaman) asked them (the bad spirits), ‘Are all the people, the village people, well?'”

The spirits replied to Tamu Pong, the shaman, “Oh, we have not seen them for a long time.  We do not know where they have gone.  We only see the smoke coming out of the houses.”  The shaman knew that the Wuning villagers had become Christians, and he came to believe that these evil spirits did not see Christians.  He then decided to accept Christ, and then converted his family. Tamu Pong’s youngest son now leads the Mandalay Church of Christ.

The colorful traditional dress of the Rawang tribe will be on full display during the celebration in Putao December 29, 2015 – January 2, 2016.

Jesus as Lord and Savior, of a people who have faithfully turned from their animistic beliefs to worship the true God and have found joy and peace in doing so.  The Christianity of the Rawang people is beautiful and gripping because they embrace the truth of Jesus while keeping their colorful culture, traditions, and customs alive.

A Rawang Celebration of culture and faith is set for December 29, 2015 – January 2, 2016.  This is the first time in a generation such a celebration will occur, and promises to be a time of dance, music, tradition and praise.    For the first time in more than 20 years, the Rawangs will hold a celebration of their culture, and their embracing of Christianity as a people group.  The dates are December 29, 2015 – January 2, 2016 and will be held in Putao.   Foreign visitors are welcomed to take part in this wonderful festival, in one of the most beautiful places on earth.  If you would like more information, please call Joana Jones at 503-828-4111, or email her at asianchildrensmission@gmail.com.