Our predicted forty-five minute journey through Yangon took 80 minutes but we had departed by 7:15 so we were at Shwe Pyita just about 8:40.   The ministry was on location at a children’s’ home overseen by Maerum Pungar’s younger sister Ginzi.  Maerum is pictured above, and she, along with Josiah and Joel (also pictured to her left) is part of the Asian Children’s Mission leadership team.

Most all of the kids living at the the children’s home were at school during our time there.

The journey to the children’s home was a National Geographic urban exploration as we wandered and wandered and finally crossed the rail road tracks after waiting for a long passenger train.  Shwe Pyita is a part of a Yangon but is by far a much poorer area.  Open canals draining most everything were flowing along the streets.  This is lowland area and most buildings were on stilts.  Construction was simple and many made of palm fronds for the walls and roofs.   Scores of merchants lined the streets.  Eventually our one lane concrete road turned to dirt.   The bus driver was amazing to handle the 35 foot bus through all the people, bicycles and merchants. 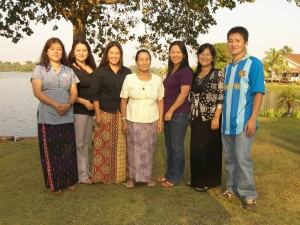 Ginzi is third from the left. Her sister Marta is on the far left. Marta and her husband James hosted a clinic at Tamwe Christian Center on Sunday. Maeram is also in the picture, second from the right. All three women are part of an outstanding Myanmar Christian family.

The welcome was wonderful at the children’s home.     Our translators came in a van shortly after we arrived.  Ginzi had tables and chairs all set up.   We just stepped in, offloaded our medicines and were ready to go.

One of my first patients was a 27 year year old woman with neck pain.  Her job was to chop and cut up the betel nuts that are used as a “chew” by many.  This produces black gums. One of the patients commented:  “black gums are much prettier.  Plain pink gums are not good.”  As they say:  to each his own.

A 42 year old man came telling me he had just completed TB therapy for 8 months(standard over here for triple therapy).  He was now coughing and short of breath.  Whoa.  He also had asthma and shortness of breath.   His nebulizer was Salumuterol and was from China.  It was not an aerosol but mechanical pump style.  I sent him to the hospital.

The sad case of the day for me was the 49 year old woman who had a complete left sided stroke 7 months ago.   I was interviewing her and she  began crying.   No therapy or assistance is available for her.  It takes money most people don’t have.

A long time smoker presented with shortness of breath.  He is now 70 and has most certainly emphysema.   Two of our medical students smoke.  I called them over and explained the disease process and cause.   It made an impression on them.

Marilyn had a 40 year old widow come for glasses.   The lady sews shirts 18 hours a day for about $1.50 a day.   She gets paid for each shirt she makes.  We talked to a school teacher who makes about $40 a month teaching.  And here we come with bills almost falling out of our pockets.  Interestingly,  I was sitting in the bus on the way home when the driver hit a bump.  Bills started falling on me!   They were in Burmese Kyat and worth fifty cents.

Maerum and Ginzi’s father was converted by the Morse missionary family, and became a leading evangelist among the Rawang ethnic group.  His children continue in his steps, evangelizing throughout the country.

Deb called me over to see a lady with abdominal pain.  She had peritonitis from some catastrophic event.  We sent her to the hospital right then.

The numbers for the week exceeded my predictions.  I estimated we would treat 1200 patients.  The number  1254.  Marilyn and Jeff fitted 288 pairs of reading glasses.  The Lord added 166 to His family.  We are overwhelmed to be His servants in this lovely land.   I have heard each team member comment on how they stand amazed as they see the commitment of the local Christian leaders.   Each of us feels we had the very best interpreter.  How wonderful is that.

We are sending a couple of medicines up north to the Putao clinic operated by Dr. John and that was built by FAME.   Isn’t that a wonderful conclusion!!

Myanmar is about the size of the state of Texas except it isn’t very wide.   The Irrawaddy River starts in the north and flows over a 1000 miles to the Andaman Gulf.  It is a large and lush country that is loaded with natural resources.  Jade and many precious stones are found here in abundance.  Teak wood is a very big export.  The land is fertile and can produce two crops a year in a rice field.  Speaking of which, we went by an amusement park today that had a nice golf driving range.  The balls were hit into a rice paddy.  Talk about a water hazard!   I assume boys go in and retrieve them as rice ponds are shallow but muddy.

The rest of the week is mostly fun.   We deserve it after a wonderful and difficult week of clinics.